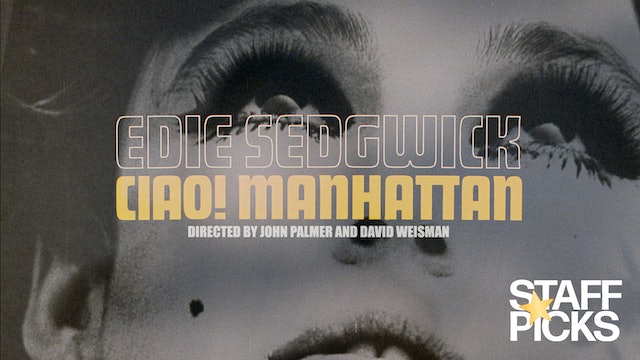 “‘Youthquaker’ Edie Sedgwick stars in this semiautobiographical film depicting her debaucherous years as one of Warhol’s superstars and the drug-addled aftermath. Filled with striking black-and-white footage of the Factory’s heyday and with appearances by Brigid Berlin, Viva, and Paul America, CIAO! MANHATTAN captures the tragedy and glamour of this 1960s counterculture muse. Edie’s performance is one for the ages, simultaneously breathtaking and heartbreaking.” —Susan A, Production

Warhol superstar and icon of sixties bohemia Edie Sedgwick delivers her final performance in this semiautobiographical look at the price of fame. Fiction and documentary—including snippets from Sedgwick’s own audio dairies—mingle in a freewheeling portrait of Susan Superstar (Sedgwick), a New York celebrity on a drug-fueled downward slide that mirrors Sedgwick’s own self-destructive spiral. Released after her death from an overdose of barbiturates, CIAO! MANHATTAN endures as a testament to Sedgwick’s unique magnetism and as a haunting elegy for the counterculture she embodied.