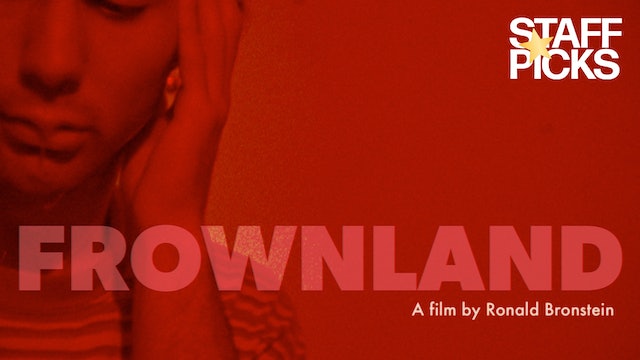 “A film that’s as much a psychoanalytic case as its protagonist is. Not so much a film enjoyed as a film endured.” —Nathan, programming

Longtime Safdie brothers collaborator Ronald Bronstein has described his lone directorial effort as “a rotten egg lobbed with bad aim at the silver screen.” Be forewarned: audience response has been intensely divided. FROWNLAND has garnered both passionate raves and scathing denunciations, while festival screenings have ended in screaming matches between patrons. It's strong stuff, yes, but none of its notorious reputation does justice to its savage dark humor, emotional heft, and stylistic audacity. Above all else, FROWNLAND is a pitch-black character study of Keith Sontag (Dore Mann), a neurotic, manipulative, stridently unlovable New Yorker whose pitiless roommate aptly describes him, to his face, as “a burbling troll in his underwear.” With the most basic elements of human communication a struggle, Keith lurches his way through an uncaring city, attempting to aid a suicidal friend, evict his unctuous roommate, and simply attain some measure of self-respect. An apoplectic seizure of blind rage, sorrow, and bleating humor . . . FROWNLAND.