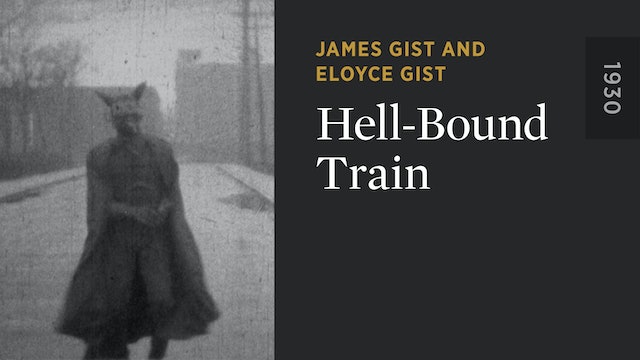 HELL-BOUND TRAIN is arguably the most significant rediscovery in Pioneers of African American Cinema. The film is the work of self-taught filmmakers James and Eloyce Gist, African American evangelists who employed cinema as a tool for their traveling ministry. Their surreal visual allegories were screened in churches and meeting halls, accompanied by a sermon and the passing of a collection plate. Rather than having a linear story, the film is instead a catalog of iniquity, a car-by-car dramatization of the sins of the Jazz Age (including gambling, dancing, alcohol, and the mistreatment of animals), presided over by a horned devil and culminating in a colossal derailment (a model train tossed into a bonfire). Admittedly, the production values are minimal—shot with handheld 16 mm equipment using natural light, sans audio—but the surreality of it all makes for a compelling viewing experience, and shows that renegade, visionary filmmakers can be found in the most unexpected places. HELL-BOUND TRAIN is presented here with a score by Dr. Samuel Waymon, best known to cineastes as having provided the moody soundtrack for Bill Gunn’s influential 1973 film GANJA AND HESS. It is believed that HELL-BOUND TRAIN was filmed prior to James’s marriage to Eloyce, so it is unclear how much involvement she had in the making of the film. But she may have had a hand in the editing and was certainly engaged in all aspects of their subsequent work.