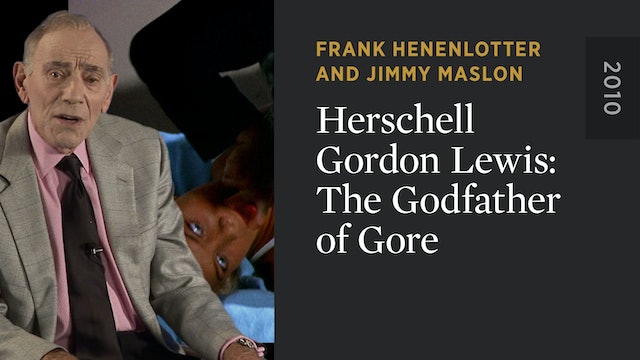 Take an outrageous ride through the wild world of exploitation films with this thoroughly entertaining documentary. Featuring cult director John Waters, drive-in movie critic Joe Bob Briggs, and Herschell Gordon Lewis himself, this chronicle begins with the innocent, bare-naked era of “nudie-cuties” that Lewis produced before shocking the world with BLOOD FEAST, the first ever gore film. Lewis continued to assault audiences with such camp classics as SHE-DEVILS ON WHEELS, BLAST-OFF GIRLS, JUST FOR THE HELL OF IT, TWO THOUSAND MANIACS!, and THE WIZARD OF GORE. With tons of clips, rare outtakes, testimony from the people who were there, and a rabid sense of humor, HERSCHELL GORDON LEWIS: THE GODFATHER OF GORE will leave you laughing and screaming at the most amazing motion pictures to ever play in American movie theaters!