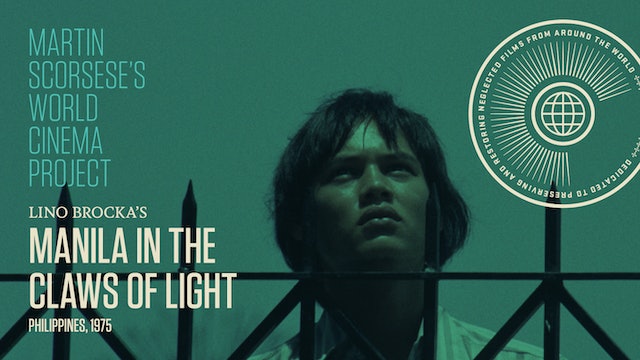 Manila in the Claws of Light

Lino Brocka achieved international acclaim with this candid portrait of 1970s Manila, a breakout example of the more serious-minded filmmaking the director had turned to after building a career on mainstream movies he described as “soaps.” A young fisherman from a provincial village arrives in the capital on a quest to track down his girlfriend, who was lured there with the promise of work and hasn’t been heard from since. In the meantime, he takes a low-wage job at a construction site and witnesses life on the streets, where death strikes without warning, corruption and exploitation are commonplace, and protests hint at escalating civil unrest. Mixing visceral, documentary-like realism with the narrative focus of Hollywood noir and melodrama, MANILA IN THE CLAWS OF LIGHT is a howl of anguish from one of the most celebrated figures in Philippine cinema.

Restored in 2013 by the Film Development Council of the Philippines and the Cineteca di Bologna/L’Immagine Ritrovata laboratory, in association with The Film Foundation’s World Cinema Project, LVN, Cinema Artists Philippines, and Mike De Leon. Restoration funded by Doha Film Institute.