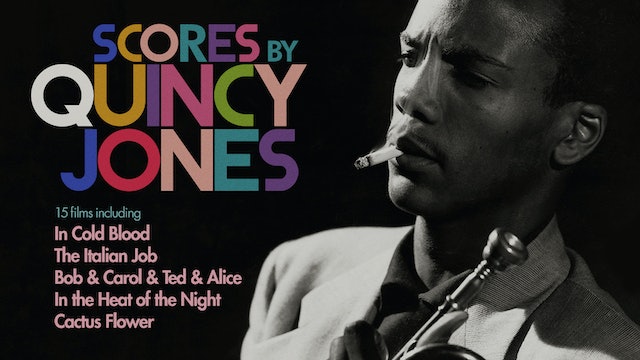 Few musicians have had such a profound effect on the evolution of twentieth-century popular music as legendary record producer, multi-instrumentalist, composer, and twenty-eight-time Grammy winner Quincy Jones. After establishing his virtuoso versatility arranging for greats like Frank Sinatra, Dinah Washington, Sarah Vaughan, Count Basie, and Duke Ellington, Jones went on to a hugely successful career as a film composer at a time when Hollywood was still largely inhospitable to black artists. Encompassing jazz, blues, pop, funk, lounge, psychedelia, bossa nova, and beyond, his ultracool, sophisticated style graces classics like IN COLD BLOOD, IN THE HEAT OF THE NIGHT, and THE ITALIAN JOB, as well as offbeat gems like CACTUS FLOWER, MACKENNA’S GOLD, and BOB & CAROL & TED & ALICE. Featuring some of Jones’s most renowned scores, this collection is a groove-filled tour through the swinging sounds of the 1960s and early 1970s.