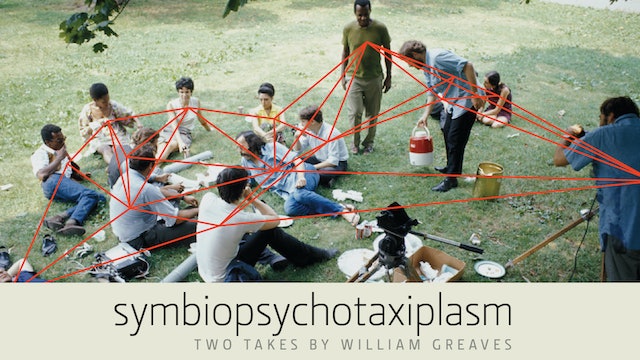 In his one-of-a-kind fiction/documentary hybrid SYMBIOPSYCHOTAXIPLASM: TAKE ONE, the pioneering William Greaves presides over a beleaguered film crew in New York’s Central Park, leaving them to try to figure out what kind of movie they’re making. A couple enacts a breakup scenario over and over, a documentary crew films a crew filming the crew, locals wander casually into the frame: the project defies easy description. Yet this wildly innovative sixties counterculture landmark remains one of the most tightly focused and insightful movies ever made about making movies, expanded thirty-five years later by its unconventional follow-up, SYMBIOPSYCHOTAXIPLASM: TAKE 2½. The “sequel” sees TAKE ONE actors Audrey Henningham and Shannon Baker reunited in a more personal, metatheatrical exploration of the effects of the passage of time on technology, the artistic process, and relationships—real and fabricated.