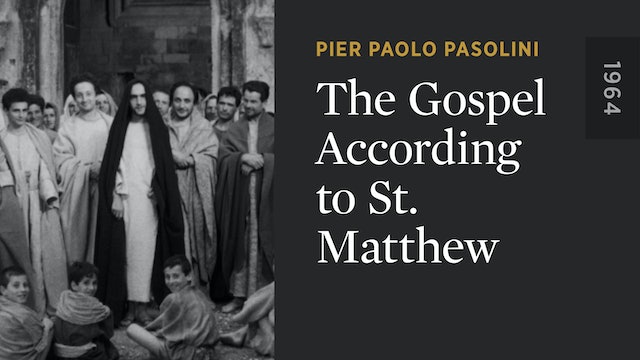 The Gospel According to St. Matthew

A biblical film that only the Marxist, atheist Pier Paolo Pasolini could make, this starkly beautiful cinematic Passion play takes its dialogue directly from the titular holy text. Casting nonprofessional actors—including his own mother, Susanna, as the elderly Virgin Mary—Pasolini traces the life of Jesus (Enrique Irazoqui, a Spanish economics student and Communist activist) as he preaches his radical humanist message in the face of persecution. Strikingly shot amid the rugged landscapes of southern Italy, THE GOSPEL ACCORDING TO ST. MATTHEW is a transcendent work of raw, almost elemental power.