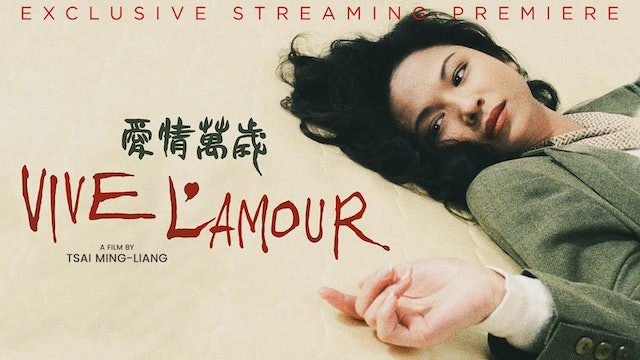 The sophomore feature from Tsai Ming-liang finds the acclaimed master of Taiwan's Second New Wave demonstrating a confident new cinematic voice. VIVE L’AMOUR follows three characters unknowingly sharing a supposedly empty Taipei apartment. The beautiful realtor May Lin (Yang Kuei-mei) brings her lover Ah-jung (Chen Chao-jung) to a vacant unit she has on the market, unaware that it is secretly being occupied by the suicidal Hsiao-kang (Lee Kang-sheng). The three cross paths in a series of precisely staged, tragicomic erotic encounters, but despite their physical proximity, they find themselves no closer to a personal connection. Featuring an intoxicating mix of longing and deadpan humor, VIVE L’AMOUR catapulted Tsai to the top of the international filmmaking world and earned him the prestigious Golden Lion at the 1994 Venice International Film Festival.